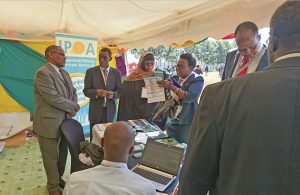 The 7th annual Conference of Constitutional Commissions and Independent Offices enters the climax today, with President Uhuru Kenyatta scheduled to give the key note address.

At the helm of the Independent Policing Oversight Authority delegation is Mrs. Anne Makori the Authority Board Chairperson. This delegation has participated in the conference since Wednesday.

The three-day event was convened with the aim of making solutions geared towards ensuring that members of the public are engaged in governance and administration issues at all levels and structures of Government.

The first day of the conference was restricted to 350 participants comprising Chairpersons, Chief Executive Officers and Senior level management from the Commissions and Independent Offices. During deliberations, Mrs. Makori told the delegates that IPOA will be steadfast in forging cooperation with other institutions to realise National Agenda delivery. She added that the Authority would; “In ensuring that the members of the public are involved in determining their course, IPOA will continue to devolve to the regions so as to reach the masses.”

The second day was characterized by field trip which culminated in the Board Members addressing a public forum at Machaku Primary School grounds in Kianjai. Mrs. Makori told women and youth groups that they can always rely on IPOA to address their grievances in policing. Strategically, the Authority in its Strategic Plan identified women, youth and people living with disabilities as a critical and priority segment of society. During the field trip, the Meru County Government conducted a tour during which the CCIOs visited sites of various development projects.

Later in the day, the County Governor Kiraitu Murungi officially welcomed the conference to the Meru County when he hosted the participants to a gala dinner.

Concurrent with the second day’s activities, the IPOA team participated in an exhibition at the polytechnic where members of the public were sensitised about the services offered by the Authority in its struggle to ensure that policing in Kenya will ultimately attain world class professional standards.​