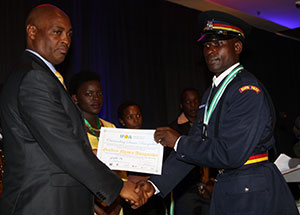 The Independent Policing Oversight Authority (IPOA) will on Thursday 12th March 2015 fete outstanding police officers and police stations. Awarding professional and efficient police officers broadly seeks to partly contribute towards fulfilling of the Authority’s mandate of professionalising policing and providing civilian oversight over the work of the National Police Service as enshrined in the IPOA Act.

The OPSA awards are categorised into five categories; Best Individual Police Officer, Best Detention Facility, Best Police Facility in Order and Cleanliness, Best Police Facility Implementing Community Policing and Extra Mile Awards. The extra mile category recognized outstanding police officers who participated in nation building activities diligently and professionally, going beyond the call of duty to make a difference in their operation areas, and the lives of the communities in which they serve.

The process of physical evaluation of the nominations comprised an evaluation team composed of officers from IPOA, the Rotary Club of Nairobi, the National Police Service (Kenya Police and the Administration Police), the Internal Affairs Unit of the police and Usalama Reforms Forum. This team visited the awardees/ stations to authenticate the nominations.

IPOA intends to make OPSA an annual event as a way of stimulating quality policing and having the public on board as an integral part of policing in Kenya.