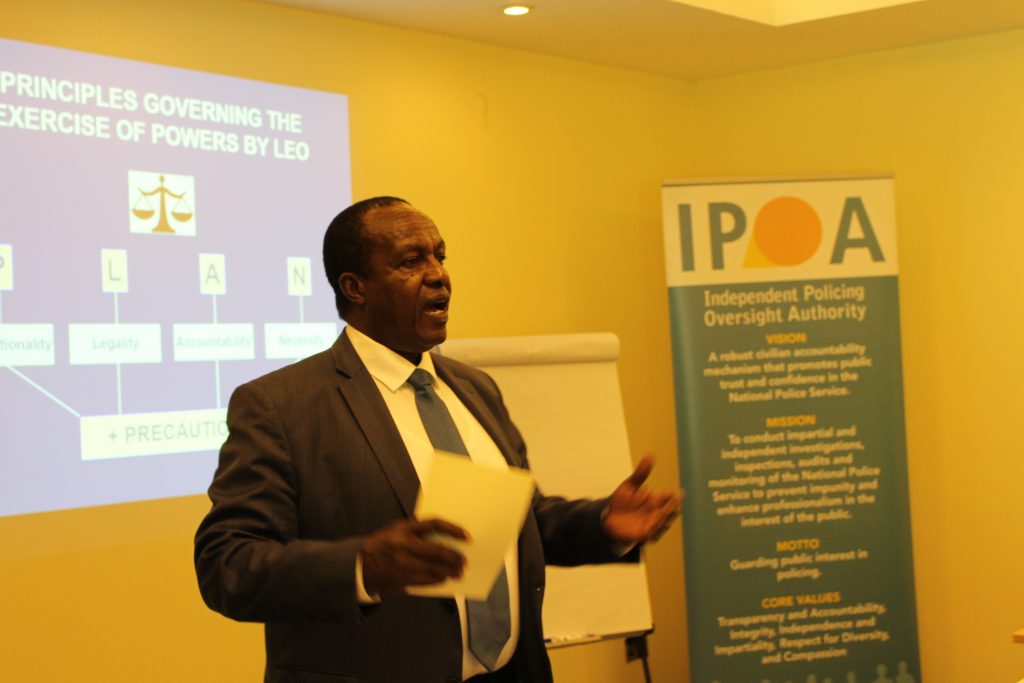 A Parliamentary Committee has called for expansion of the mandate of the Independent Policing Oversight Authority (IPOA) to enable it to rein in other security State agencies involved in unlawful killings and other human rights violations.
Hon. Paul Koinange, the Chairman of the National Assembly’s Departmental Committee on Administration and National Security said if implemented, IPOA would oversight agencies including the Kenya Wildlife Service, Kenya Forest Service and Kenya Prison Service.
“My Committee is seriously considering expanding your mandate, by amending relevant laws, so that besides oversighting the police officers, you can also oversight other armed Services, reason being their officers interact with the public and we have heard numerous harrowing cases of torturing, maiming or even killing our people,” he said.
Hon. Koinange was addressing IPOA Board members during an induction retreat on human rights in Naivasha.
The MP also asked IPOA to expedite investigations into cases of extrajudicial killings.
He told the members of the Board: “You are taking office at a time when the media has been highlighting many cases of extra-judicial killings in our country. You need to deal with the issue promptly and thoroughly. No one should have a leeway to determine that someone is guilty and go ahead and kill.”
Hon. Koinange cautioned that allowing unlawful killings would turn Kenya into a lawless country.
The IPOA Board, which assumed office in September was led by Chairperson Anne Makori in the retreat.
She said: “With the support and expertise available and considering the fact that we are not starting from scratch, we have no excuses and we will only talk of results. We seek counsel from the Committee so that we remain focused. By the end of our six-year term after, we will have a more professional National Police Service.”
Hon. Koinange reiterated the crucial role played by IPOA: “Good countries rely on that fine balance between the trust of the public and use of force by the police. The police have to know when to use force and how much. The public has to trust that police only shoot those who endanger society.”
He went on: “That balance in the consensus that keeps democracies alive and IPOA is the custodian of that delicate balance. If that consensus is broken or one cannot trust the other we are doomed as a country.”
The Chairman further noted that when the inaugural IPOA Board left office at the expiry of its six-year term in May, 752 cases had been investigated fully, 164 files forwarded to the office of Director of Public Prosecutions and 64 cases were pending in court.
“The last IPOA Board did a very commendable job. For once in many years, police became accountable for their actions. We expect you to do much more than that since most of the staff and structures are now in place,” Hon. Koinange said.
He added: “I want you to borrow a leaf from your predecessors who never allowed themselves to be divided by those opposed to police oversight and accountability. We expect delivery, we expect impunity and crime levels to decrease, a herculean task for all of you.”
The Chairman also praised IPOA for being one of the few Government institutions that operates within budget and has no pending unpaid bills.
Hon Koinange stated: “This are very high standards that must be emulated by all and I expect the trend to continue.”
IPOA has in the past received unqualified reports from the Office of Auditor General.
​